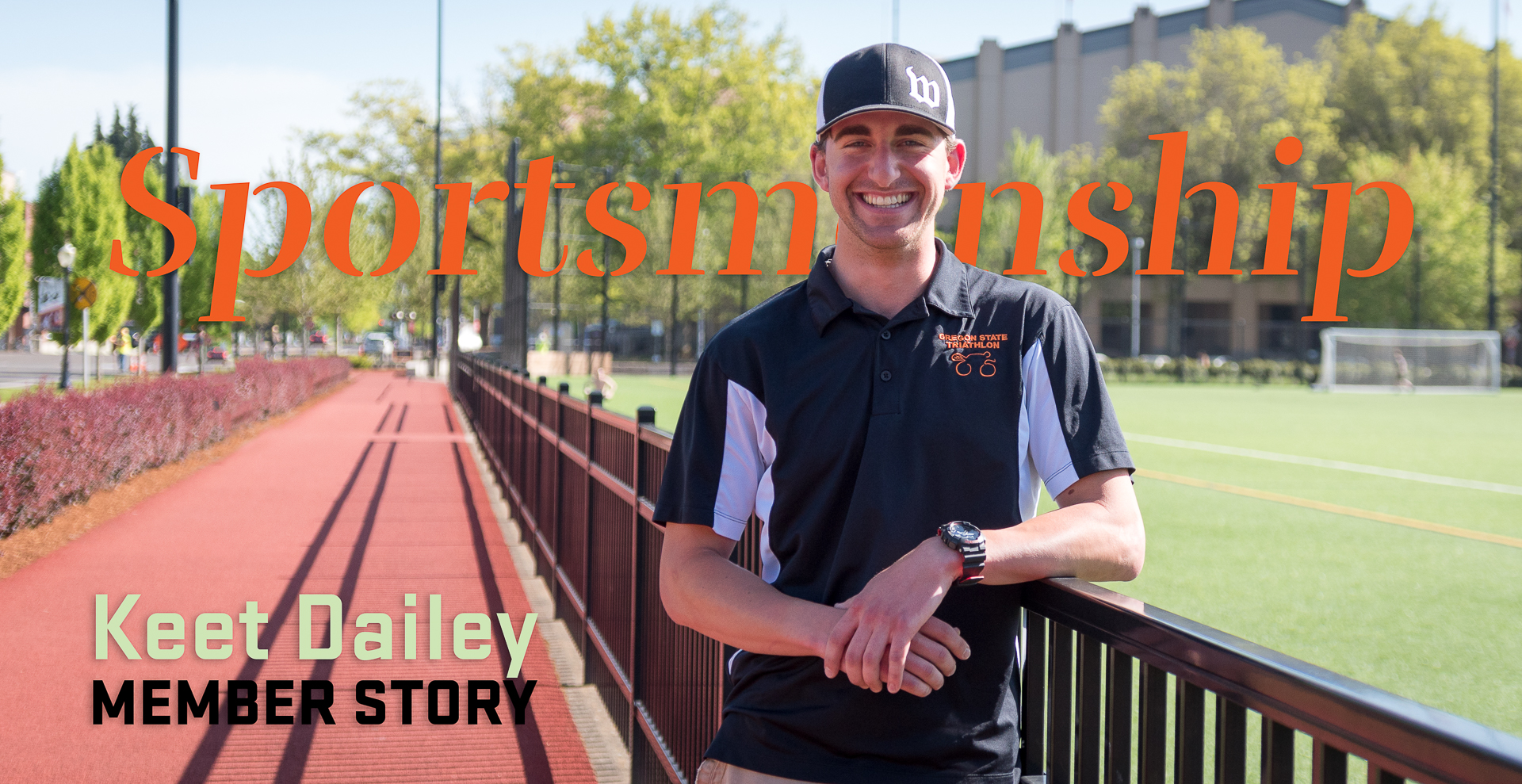 Keet Dailey, a senior studying Kinesiology and an Operations staff member at Rec Sports, demonstrates the qualities of an exceptional athlete. He trains hard to compete as a triathlete and to better himself with each race. However, what sets him apart from the competition is his outstanding displays of sportsmanship.

In 2013, during his freshman year of college, Dailey joined the OSU Triathlon Club after having a general interest in the sport. “A triathlon is a race that has three disciplines to it where you swim, you bike, and you run, and in between each discipline, you transition,” he said, “It’s a nonstop race and you go until you finish.” Since beginning the strenuous and competitive sport, Dailey has conquered many obstacles in the face of adversity. 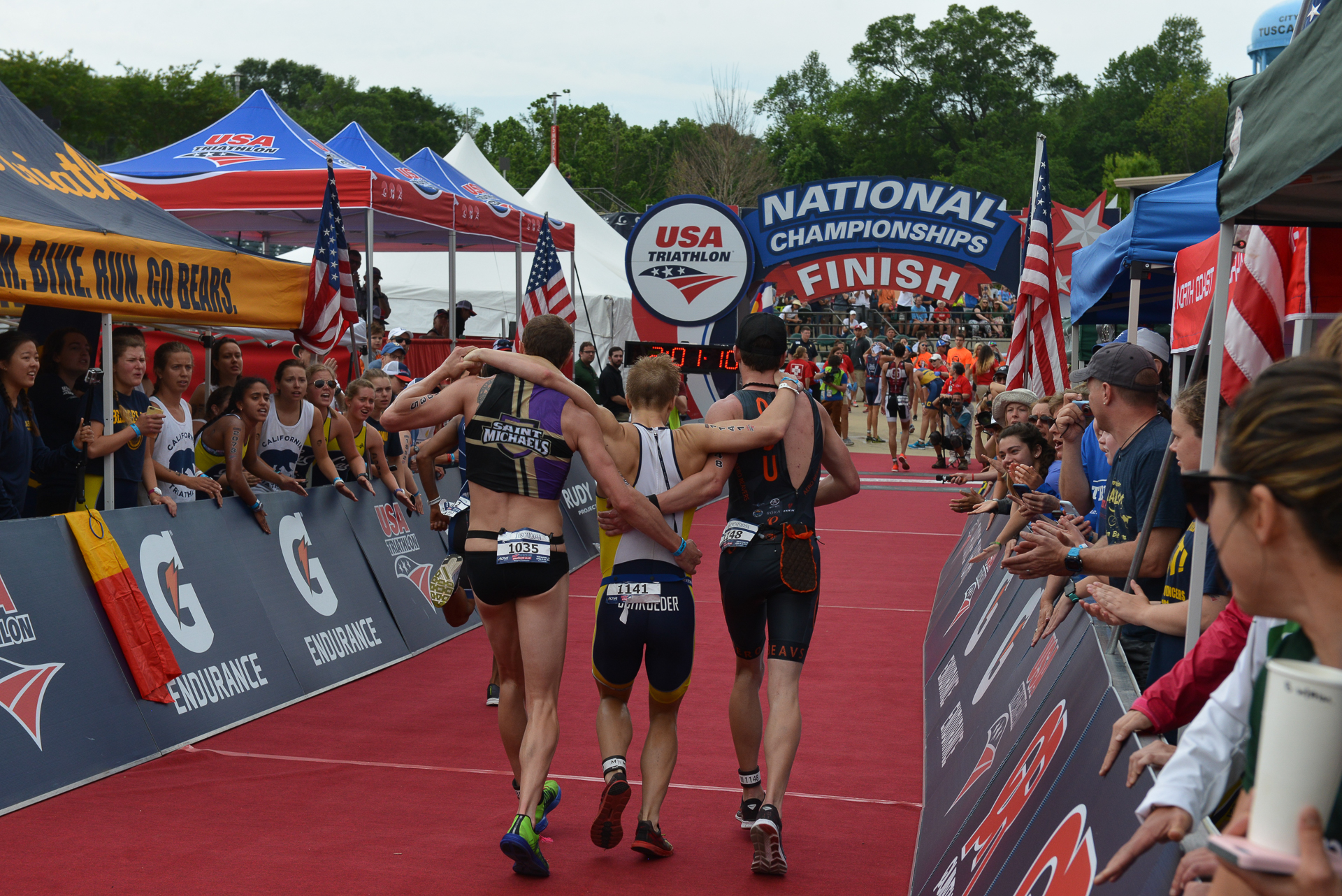 During his first race at Wildflower in California, Dailey placed twelfth overall. Shortly after, he competed at the National Championships where he would place second in the country in his age group. After several wins and achievements, he later went on to qualify for the Triathlon World Championships in 2015, but not without a small setback: Dailey was hit by a car on his way home from class in which he broke his wrist. “When I first realized I qualified for Worlds,” he said, “My energy level was just through the roof. I was so excited to do that because I’d never been on a world stage racing like that before and when I got the news that I had a broken wrist—I thought it was sprained—I was in complete denial that it was actually broken.” His doctors didn’t believe he would be able to compete at the Triathlon World Championships due to his accident, a heartbreaking moment for Dailey. “I was in an emotional mess,” he said, “It felt like it was something that was stolen from me because it was something that was out of my control, that I couldn’t handle, couldn’t take control of.” However, his fate changed. After two months, the doctors removed the cast on Dailey’s wrist, enabling him to compete in Chicago at that year’s World Championships. “Worlds is definitely something you cherish because not everybody gets the opportunity to race at Worlds so definitely having that opportunity to race there was very humbling to me and was awesome because I got to see professional athletes that were racing, other age groupers that were just like me who were trying to race as hard as they could,” he said, “Racing against the best of the best was definitely a great moment in my triathlon career.” 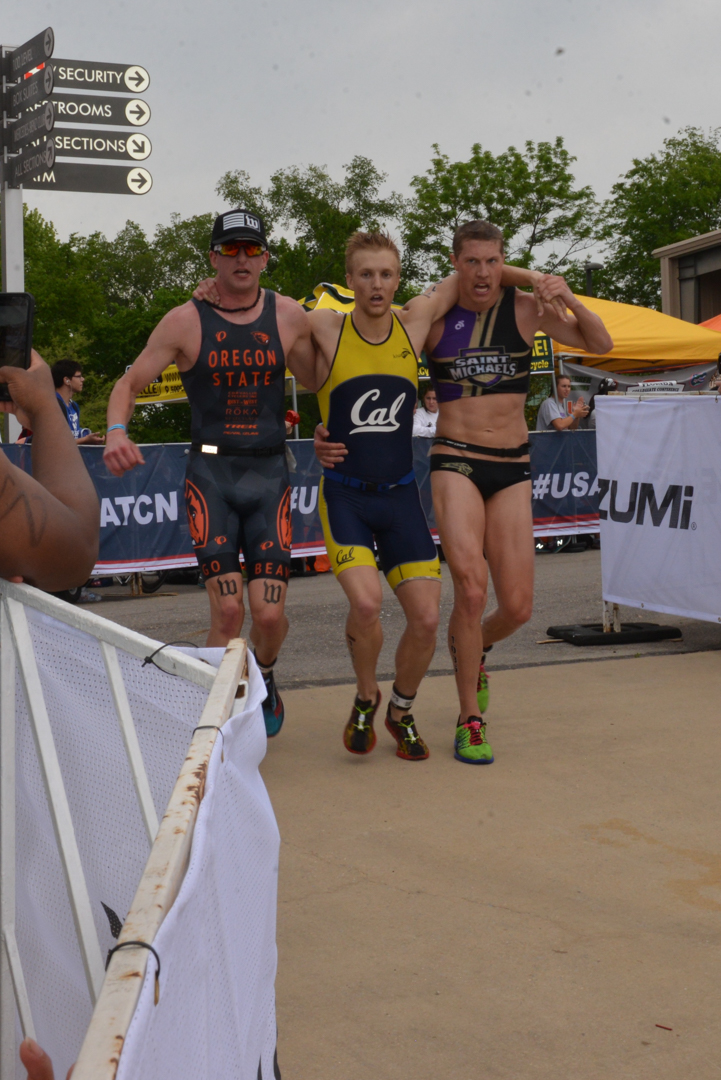 At the 2017 Collegiate Nationals on April 22nd, Dailey faced another career high moment during the Olympic-Distance National Championship triathlon. It was a hot and humid day in Tuscaloosa, Alabama, making an already challenging race that much more difficult. As Dailey began picking up his pace during the last quarter mile of the run portion of the event, he rounded the final corner to find Grant Schroeder, a competitor from UC Berkeley, who was clearly in distress from the conditions. “My first instinct was ‘this guy needs help’ and it’s just my natural instinct to help people,” said Dailey, “Getting him across the finish line was at that point in the race, my biggest goal. It didn’t matter about placing anymore or time; I just wanted to get him to the finish line.” Despite feeling exhaustion himself, he lifted Schroeder and continued moving toward the finish line.

Another competitor, Spencer Ralston of Saint Michael’s College, noticed the pair in distress and jumped in to help. “I was lucky Spencer came along and helped us out because we really needed help to get Grant to the finishing line,” Dailey said, “He really wasn’t able to run or walk so we were literally dragging him.” At this point Schroeder was unable to move his legs and was doing all he could to remain conscious. “It’s definitely one of those things that I’d never experienced in my entire life,” said Dailey, “People are always cheering at the finish line because it’s just a really exciting moment finishing off Collegiate Nationals and you’re racing against the best in the country, but never have I ever heard a crowd being as loud as they were.” In awe of the exceptional sportsmanship happening before their eyes, the crowd rallied the three competitors as they crossed the finish line. Schroeder then received medical attention to counter his severe exhaustion and 107 degree fever.

It was in this moment of sportsmanship that Dailey and his two competitors proved that there’s more to a sport than a simple win. “The three of us, none of us knew each other, but once we crossed the finish line, that seemed to be the highlight of the race,” said Dailey, “It’s definitely a humbling experience going through that kind of situation with Spencer and Grant.” At the end of the race, Dailey had no idea what the event would amount to and how it would impact those around him. “For me, it’s just a simple act of kindness. Being a good sport has always been something my dad taught me—being a good sport, being a good athlete, being a good teammate and a good team captain. It’s just something I always do. That was definitely a time that I helped an athlete out. I never really thought it was going to go big like this,” he said, “That’s not the point of it. Sportsmanship is bigger than that. It’s not just about a video going viral, or a photo—it’s really helping each other out and being a good sport.” 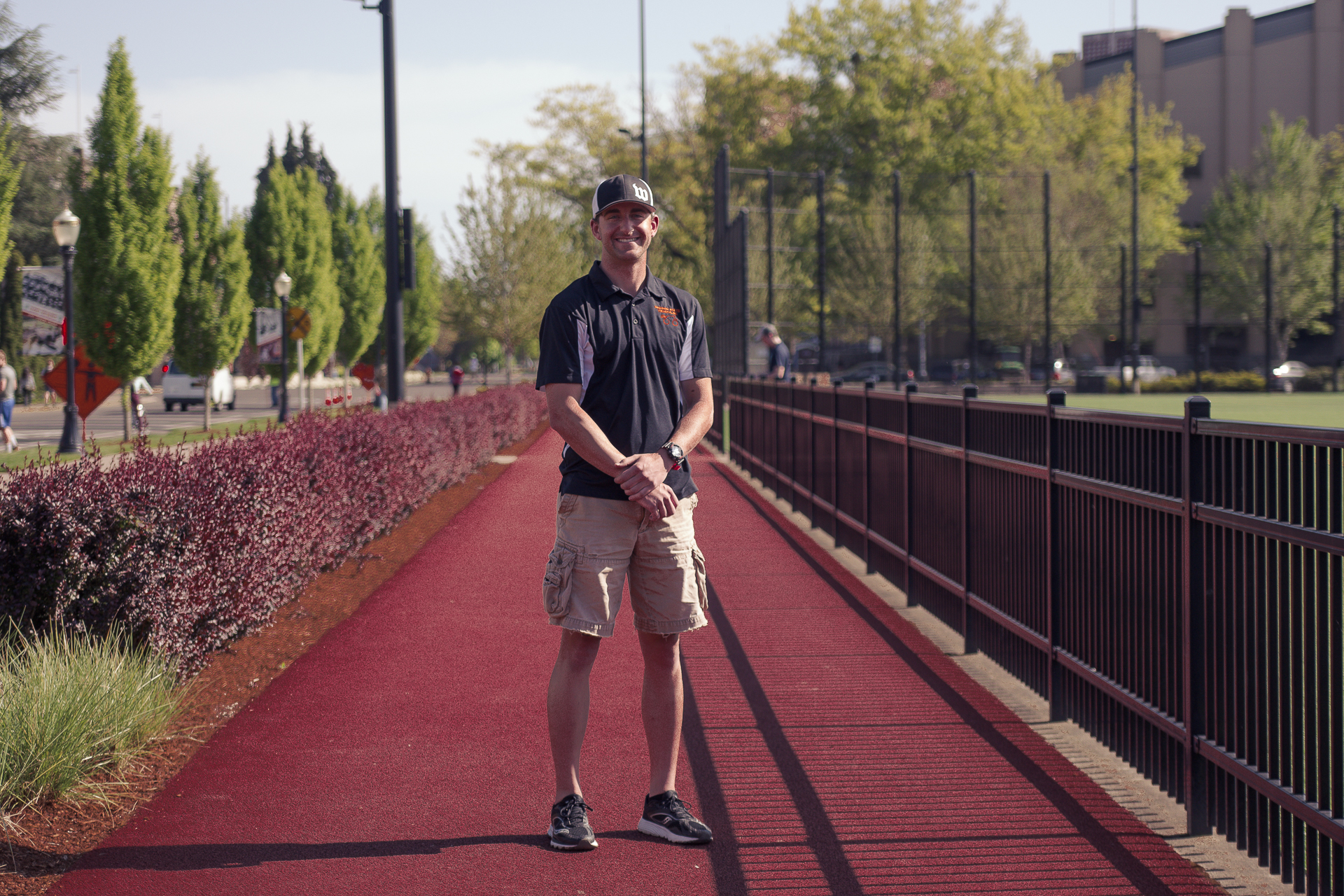 In an incredible display of sportsmanship, Keet Dailey assists a collapsed runner to the finish line.

"ALI for me was kind of this place where I found a home culture. It wasn’t only a place of work, it was a place where I found some really close friends and we shared the same values. It really made the transition as a transfer student so much easier."

Oskui is passionate about breaking down stereotypes about women who wear hijab. She wants people to know that hijab is not a sign or symbol of oppression.

James Underwood, Recsports Alumni, was involved in Greek life, cheerleading and was even Benny the Beaver. He was always on the go. He shares with us some life lessons he learned through his experience at OSU.

Catching up with Godfrey

Earlier this summer, We got a chance to go canyoneering and catch up with our good friend Godfrey. You may remember his film:

Reflections on My Experience: The Adventure Leadership Institute

Andrew DelGreco, Adventure Leadership Institute alumni, reflects on his time he spent with the ALI.